We’re so impressed with Nelson Bay Golf Club‘s new pathways, they look great.
1. NBGC excavated out the old material to the existing edging and compacted the base.
2. Introduced new red recycled aggregate to the top of the edging and screeded with a slight crown.
3. DirtGlue time! Applied DirtGlue Industrial to the surface with watering cans and then compacted with a hand roller.**

👍👍👍👏👏👏
** It’s important to let the pathways dry completely before using. 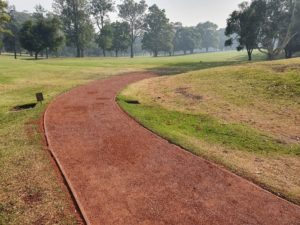 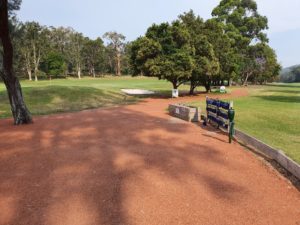 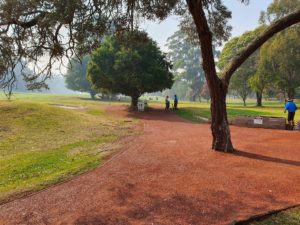 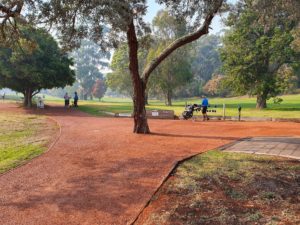 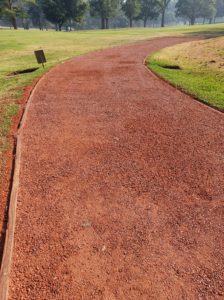 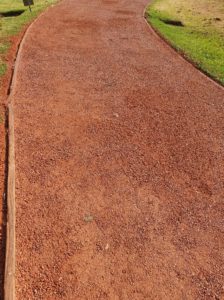 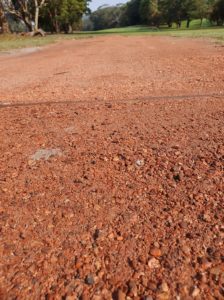 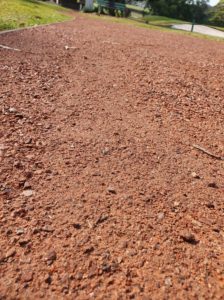 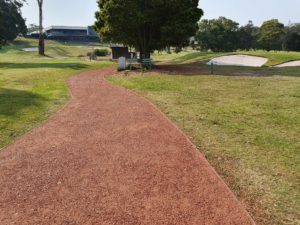 Exciting times at Green Track Solutions! Last week we welcomed to the GTS family, Yu Zhang (Larry) & GTS (Hai Nan) Environmental Solutions Co Ltd.
We look forward to working with them as our exclusive Chinese distributor.
Their visit was action-packed, with an official signing of the exclusive agreement, product demonstrations, laboratory and product + solution training.

We were asked to help with the restoration of footbridge that had been vandalised. DirtGlue was effective in more ways than one.

Summary
As part of a walking track project in Clarendon Vale, the Council commissioned the construction of a footbridge. Weeks after its construction, it was vandalised and required rebuilding.

To make it less vulnerable to further attacks, the Council booked us in to toughen up the bridge with an application of DirtGlue®.

Outcomes
We began by treating the red gravel on either side of the bridge with DirtGlue® and compacting with a plate compactor. The bridge now has a long lasting, rock solid entry and exit path, which is also grippy.

We next poured DirtGlue® in and around the large rocks that supported the bridge. This served to form a red gravel cement around the rocks, locking them in place.

Finally we dusted the surface of the timber with DirtGlue® and fine gravel, creating a coarse, non slip surface. The glue also improves the timber’s protection from the weather.

This project is a great example of the strength and versatility of DirtGlue®.

They said this track would never last, and they were probably right. However, thanks to a timely DirtGlue intervention, the track now has a fighting chance of surviving.

Background
Howrah Beach and Little Howrah Beach is separated by an 80 metre section of rocks. The walk across the rocks is hazardous, especially when the tide is up. The beaches attract a lot of walkers so providing a safer path between the beaches made a lot of sense. Clarence Council devised an ambitious plan to construct a path over the rocks, ambitious because high tides would rise above the level of the path.

In February 2016, the path was constructed. Within weeks, high tides had smashed the path and it had to be repaired, and then repaired again. In April, Clarence Council contacted us to see if DirtGlue® could save the track. To demonstrate the capabilities of DirtGlue® we treated a 10 metre section of the track. Six months after the application, the treated area of track was as firm and secure as the day it was treated. Unlike the rest of the track which was suffering badly.

Having passed the trial, Clarence gave us the go ahead to treat the rest of the track with DirtGlue®.

Outcome
The path has been saved. As well as creating a long lasting sealed gravel surface, DirtGlue has also locked-in the rocks that contain the gravel.
This project is a great example of DirtGlue working in extreme environmental conditions.

From a distance, it looks like any normal red gravel car park. However, get up close, and you’ll discover that the gravel surface is solid, rock solid.

There are numerous red gravel car parks along the coastal road at Seven Mile Beach, 15 minutes east of Hobart. Red gravel is an effective short term solution to surfacing these car parks – the gravel is easily available and relatively low cost. However, it has its shortcomings; the gravel quickly becomes displaced due to cars driving on it and bad weather. Typically the surface develops pot holes and when this occurs, the Council sends in a crew to reset the levels and lay more red gravel. Another major issue is the loose gravel from the car park gets washed into the drains and underground pipes. Over time, this causes significant problems for the drainage system.

Clarence Council approached us to see if DirtGlue® could provide a better long term solution for this car park’s maintenance strategy.

The Council wanted to steer away from concrete, bitumen and asphalt, as this was cost prohibitive and also not appropriate for the site.

For this scenario, using DirtGlue® Industrial was a great fit for the project – a long lasting sealed gravel surface, cost effective, environmentally safe and a natural finish that fitted in with the local environment.

After the Council had prepared the base and laid the gravel it took just half a day for our GreenTrack contractor (D Howard Landscapes and Excavations) to apply the DirtGlue and roll the surface. The car park was closed to the public for just four days.

GreenTrack and DirtGlue® delivered exactly what was expected. This 230 square metre car park at Seven Mile Beach now has a sealed red gravel surface; it is rock hard and wearing well. From a distance it looks no different to the original red gravel car park, local residents may not have even noticed the change.

Inspecting the drains around the site, it can be seen that the drains being fed by water running off the car park are relatively gravel free. Whereas, other nearby drains are clogged with gravel washed in from red gravel paths along the road side.